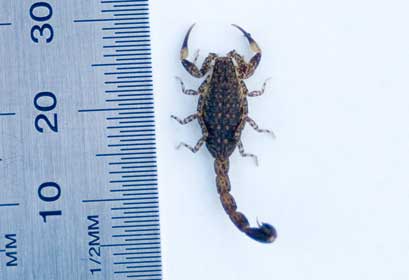 Our first ever encounter with these tiny scorpions was back in March, 2007. We were moving boxes into our new home on our 22 acre rural property (unpacking boxes – a task that never seems to end) and underneath one of those boxes was a tiny but instantly recognizable scorpion.

Research into our first specimen identified it as a Marbeled Scorpion,  Lychas marmoreus, apparently very common across southern Australia. We read that scorpions fluoresce brightly in ultraviolet light. So before we released him outside the next night, we pulled out our UV (blacklight) tube and were delighted and surprised to find the whole animal indeed does fluoresce, not just markings or some parts – but the entire animal.

Since 2007 we have found these little scorpions regularly – in fire wood, under stones, pavers, even digging around the garden has unearthed them. We’ve relocated numerous scorpions from firewood piles, excavation sites and during clean-ups, to safer, less likely to be disturbed locations on the property.

Last week (May 2011) my husband found one lurking in a log that was about to get tossed into the wood fired hydronics heater. We had been talking for some time about trying to photograph the fluorescence, and this was our opportunity. So before it was released back outside we pulled out the UV tube and the cameras.

My D70 interestingly seemed to absorb the green light and although to the naked eye the scorpion appeared to fluoresce green, through the camera viewfinder and in the resulting images it appeared light blue. By adjusting the colour temperature during the RAW image import we were able to reproduce the colour as perceived by our eyes.

We have never found Marbeled Scorpions to be aggressive. At most when handled they will raise their tails as if to strike. Even when trying to extricate the most stubborn scorpion from imminent danger they have not attempted to sting. They are however quite venomous and if they must be handled should be handled with great care. Stings are apparently very painful, instant and in some people can trigger allergic reactions. Advice is to seek medical attention for any Marbeled Scorpion sting.