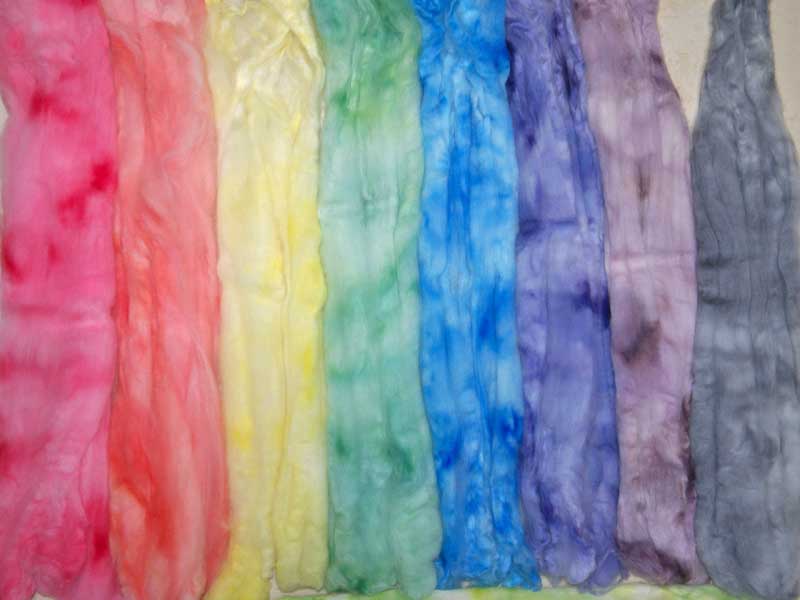 First thing Saturday morning I read through this weeks lesson instructions over a hot cuppa, printed them out and inserted the pages in my Wool Dyeing display book. The plastic sleeve pages are invaluable for situations where water (and dye) is likely to get splashed or dripped around.

Saturday after lunch is the first opportunity I get to start the next lesson.

The notes for the first exercise in Lesson 2 suggested dyeing one colour or multiple colours in separate pots or jars, and gave recipes for making eight pastel colours from dye stock. I could fit eight coffee jars in my big stock pot, so what the heck – do all eight!

Making up the stock was easy-peasy. I *love* acid dyes! Mixing the pastels from the stock was a little time-consuming but otherwise a simple job. All the  jars loaded with pre-soaked roving and dye go into the stock pot, water added to the stock pot up to the level in the jars. Pop in the thermometer, light the gas and we’re away.

After last weeks final success the smartest thing to do was follow the same successful procedure. The temperature in the Dye Room was no better than last week, and heating the stock pot to just below simmering took a while even with the lid on the pot. Then the room temperature vinegar was added to the jars, and 30 minutes of occasional pot-water stirring later, the heat was turned off and the pot was left till the next morning.

First task – bring the stock pot up to the house and gently wash the roving in cold water – the whole pot and contents were quite cold by now. As expected, the roving did not felt at all. The colours looked wonderful even while still wet!

The most amazing thing is the dye jar water remaining had virtually no colour left in it, and no colour came out of the roving when it was washed. In this photo, the water in the tub is a combination of the roving rinse water, and the dye water from the jars. The roving is still wet, but the water dripping off it is clear. For those of us coming from an MX dye background, even natural dyes, with cotton and silks, this is simply amazing!

Although the lesson notes called for solid pastels in the first exercise, I’m far more interested in mottled colours. Apart from an initial stir and poke to get the dye colour through the roving in the jar, the jars were not stirred during the process. The roving came out mottled and I love it!

On to the rest of the lesson.

The remaining parts 2 and 3 of Lesson 2 were basically the same as last week, just using the pre-mixed stock dye instead of mixing powder. I decided to try gradations of brown for the 2nd exercise, and variations on purple, blue-purple, purple and red-purple, for the 3rd exercise – 3 colour ways.

Exercise 4 was mottling, which I’d already done albeit slightly differently. So I decided to experiment with two colours inspired by the spectrum from exercise 1. Colours I felt were “missing” – an apple green and gold – by adjusting the ratio of stock colours.

Dyeing multiple colours in jars in the stock pot was working well so we stuck with that method.

Sunday was even colder than Saturday, and the pot element only made a small difference to the dye room temperature – took it from a chilly 10.2C to 12.3C over the hour of warm-up and simmering.

The jars with the (chop)sticks in them were the gradations and 3 colour ways. They got an occasional poke and stir when the pot water was stirred. The pot water was stirred fairly frequently to ensure no hot-spots developed and the heat was spread as evenly as possible around the jars.The orange and green jars at the back were the mottling samples. No stirring, no poking, just soaked roving squished into the jar, and dye poured over the top.

Again, at the end of the 30 minutes pre-simmering, the element was turned off, and the pot left with the lid on to cool down. Sunday evening the pot was brought up to the house and the roving washed and hung to dry.

The results with mottling pieces were interesting, with quite a lot of white un-dyed wool. As per the lesson instructions these jars were not stirred, and the dye and vinegar was simply poured over the soaked roving. In the first exercise I had added 1 cup of water to the jars, soaked the roving in this water *in* the jars, added the dye and poked it around to make sure it penetrated the roving and I could see no white spots left before placing the jars in the pot.

The brown gradations resulted in 3 shades of a lovely peaty brown colour. I was particularly pleased with the purples – from blue-purple, purple and red-purple.

In summary, a particularly pleasing result, with some interesting observations.

More to come yet in Week 3.