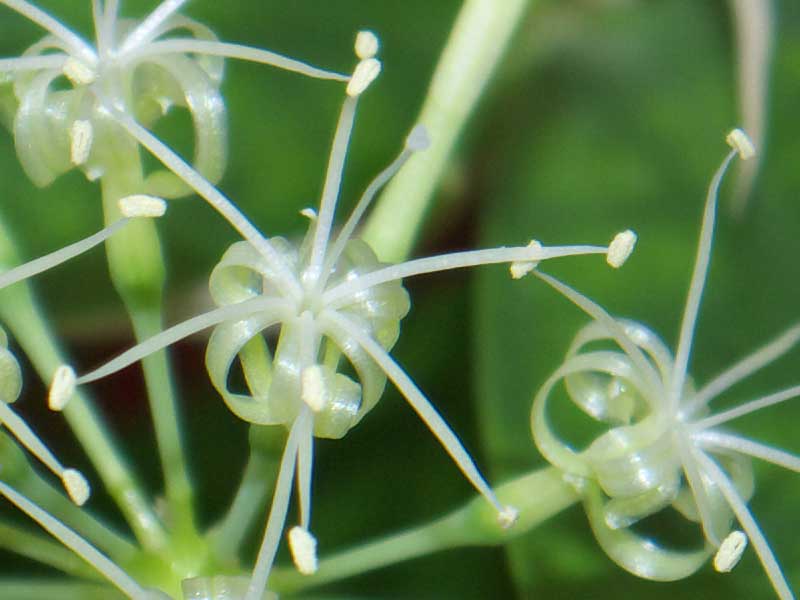 Dracaena surculosa punctulata “Sierra Leone” is known in Malaysia as “Japanese Bamboo”. It does bear a superficial resemblance to a thin ornamental bamboo and for decades I believed it to be one. Researching the flower recently I discovered it is not a bamboo at all, but a member of the Dracaena family, and possibly quite rare.

The plant was given to me in the late 1980’s, and for decades it simply sat on my kitchen bench doing little more than surviving.

Then when we built our “grand design” earth-covered house our kitchen bench did not have sufficient natural light for plants. However we had built in two light-well atriums, one of which I was determined to turn into an indoor tropical garden.

The  Dracaena and a collection of other, previously “house plants”, fish tank plants and glasshouse refugees were planted into a large artificial garden bed that included a pond system. They thrived.

The hoya carnosa I’d propagated from seed produced by another inherited plant took to the walls like ivy. The calathea grew so quickly it had to be divided and regularly pruned back. A philodendron that had not done much as a glasshouse plant took off up the wall to the elk horn and started to flower. Various bromeliads flowered, divided and pupped and the water plants tried to outgrow and escape the pond into the airspace above.

The new Dracaena shoots headed straight for the twin-wall double skinned polycarbonate roof with a speed reminiscent of bamboo. Some branches became so heavy with foliage they drooped back to fall in the pond – and struck root. It grew so well and prolifically I potted up a couple of rooted cuttings and they now challenge the roof space in the other atrium.

Within the year the Dracaena, happy in it’s new home, began to flower. All three bigger plants now flower regularly, although not all at the same time. Only one seed has been noticed to date although flowers have been numerous.

Sadly the elkhorn did not like the new environment and after a brief spurt of new growth and spore production died off, to be consumed and overgrown by the other plants. The Golden Hairy Legs tree fern thrived for a while, then withered away. Other small ferns appeared out of nowhere as they tend to do. One mysterious plant that was found as a featureless tuber when the glasshouse was emptied for the move is ever-so-slowly developing fronds reminiscent of the Tassle Fern I used to have once but had thought died off.

This collection was added to over time with Bat Plants – tacca chantrieri (black flowering), and tacca integrifolia (white flowering), more bromeliads, phalaenopsis orchids and rock orchids. The Black Bat Plant has been spectacularly successful – flowering, producing large seed pods and self seeding into the garden bed around the parent plant. The White Bat Plant has not yet flowered, but is increasing in size and vigor and may flower later this year.

The planted garden atrium is a wonderful feature that never ceases to surprise. A small piece of the sub-tropics in a cold wintered, dry, inland climate.

[ To see larger, un-cropped versions of any of these images, just click on it’s thumbnail. For a full size un-cropped slideshow of all images on this page, use the left and right arrows on the pop-up image viewer. ]

Many thanks to Joy from A Patio Garden for her invaluable forum posts with pictures helping to identify dracaena surculosa punctulata “Sierra Leone”.